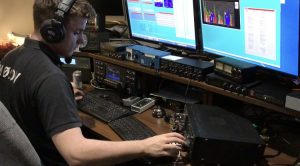 This year I was looking for a station and lucky for me Mark M0DXR said he would be in the US at K3LR and told me to speak to Chris G0DWV. Chris said he was happy to host me and we started talking about plans. Being the biggest and best contest of the year I wanted to do a reasonable entry. I decided it would be good to do SO2R. This has been the first contest that I’ve properly used SO2R and I’m happy to report that there were no horrible errors on my part.

Into the contest it’s self, The first night on the low bands was incredible. Rate was high and mults were plentiful. I actually managed the first 1000 QSO’s by 1 hour after Sun rise. That’s good going! After sun rise is where conditions flipped. 20m was disappointing, rate was slow so I decided to use this to have a go at Dual CQing on both 20 and 15m. I learned a few things here. The main one being, If you’re going to dual CQ, the CQ its self needs to be short and fast. I settled for “CQ G9Y TEST” at 34 wpm. This seemed to be just right for interleaving QSO’s. With another night shift coming in, I decided to work the Sunset DX on the low bands, YB, VK, ZL mults, along with far east Russia (Zone 18) and some South East Asian countries. After this I went to be for a few hours waking with enough times to fill in 80/160 Q’s which I thought were a bit down on what they should be.

The second day was much better. I worked the missing Europeans from the day before and started to focus on chasing more elusive mults. This in its self was challenging. Most of the contest I have done this year have been RUN RUN RUN, “Rate is King, the mults will find you”, but this contest needs a bit more strategy. So using the second radio as much as I could I would Pause the run on 20 and CQ on 15 whilst searching for Mults, and vise versa. This resulted in me worked some of what I needed (albeit not all). The 2nd radio also let me keep an eye on 10m, which did have a short opening to Africa bagging me V55A, ZD7W and some ZS stations. All Multipliers of course being some of only 7 Q’s on the band.

This contest was super fun! I had to learn things about contesting that I never thought I’d do. Reflecting, I needed to spend more time in S&P mode looking for the multipliers and less time trying to make a load of 1 point QSO’s. I also needed to better plan my off time. This caused me to loose some 160m QSO’s. It seems Experience trumps Youth in the case. Well done to Nick FAL who appears to have beaten me (By 90k Points) It’s Close!

Thank you to Chris G0DWV and his YL Tina for being incredible hosts and making me feel welcome yet again!